The morning after a baby tooth came out was always fun around our house. The excited digging under the pillow, the delight of finding a shiny gold dollar, and the wonderful clinking sound sound as it went into the bank. The girl had Bessie, her cow bank, and the boy loved Hay-Hay, his chicken bank. They were a place to store coins but they were also toys with personality.

Because bitcoins don’t actually exist, storing then isn’t nearly as charming or fun.

While regular coins can be stored in drawers, pockets, cow banks, and seat cushions, bitcoins are stored on the blockchain.

And where is the blockchain? It’s on millions of computers distributed around the world. I’ll talk more about the blockchain and the nature of bitcoins in future posts but for now, let’s just say that bitcoins are stored in the cloud at an address that looks like this: 3t92T1WpEZ73CNnQviecrMyiWrnqRhWkLy.

Each address is associated with a private key (which looks like this: L4GGtKQetr4MV9zDEnhmvhssnL7DppN53hMLKpqQ7JLxJCnxVD3x), and if you lose your key, your Bitcoin is gone forever. 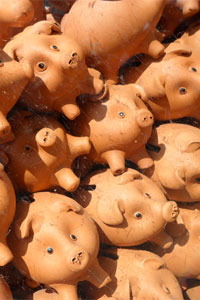 In a way, your address is kind of like an old fashioned piggy bank—the kind that didn’t have a stopper and that you had to break with a hammer to open. Addresses are only used once, so when you spend Bitcoin, you need to have another address ready to put your change into.

Because breaking and making piggy banks every time you want to buy something is a pain, Bitcoin is more practically stored in bitcoin wallets, which are a collection of addresses and private keys.

With a traditional bank account, you take your tooth fairy dollar to a building where they put it with all the other tooth fairy dollars. You get a receipt for your dollar and can ask for it back at any time. The dollar they give you back probably won’t be the same coin you originally gave them, but that’s ok. You don’t need to know exactly where the coin is being kept and you don’t need to remember a long list of letters and numbers to get it back. You also don’t need to worry about the coin getting lost or stolen because that is the bank’s problem and they are insured by the government. You can access your dollar with a credit or debit card or with a simple password and a pin and if you forget these things, the bank will give you new ones.

With a hosted wallet, you don’t have control of the Bitcoin—the host does. Hosted wallets are great for beginners. They work like regular banks, make it easy to use and store your coin, and you can get help if you forget your account information.

The big downside of of a hosted wallet is that the Bitcoin is not yours. You don’t know the address or the private key—the host does. If the host is untrustworthy or incompetent, your Bitcoin could disappear. And unlike a bank, the wallet host is not insured by the government.

Hosted wallets are great for holding a little bit of coin—your online spending money—but you don’t want to keep your life savings in one.

A hot wallet is one where you and only you have the Bitcoin address and the private key: the coin is yours.

The distinguishing fact of a hot wallet is that your private key is kept on a machine that is exposed to the internet. Being connected to the internet means that using your Bitcoin is very convenient, but it could be stolen by hackers or viruses.

Hot wallets also put the burden of keeping track of your account information solely on you. If you lose your private key or if the device you are keeping it on is stolen, your Bitcoin is gone.

A hot wallet is a lot like the coin purse you put in a pocket or bag that you use take your tooth fairy dollar to the candy store. Your coin is probably safe there, but you don’t keep more in it than you are willing to lose or have taken from you by the schoolyard bully.

A cold wallet is one where your private key is never exposed to the internet.

Some examples of cold bitcoin wallets are—

A paper wallet: This is just a piece of paper that has your address and private key written on it. Don’t lose or spill coffee on it.

A hardware wallet: This is a usb device that stores your addresses and private keys in an unreadable form so they are never exposed to the internet. You just plug the wallet into any computer and push a button on the wallet to generate a signed transaction (that is one that is complete and ready for the miners to process). Hardware wallets can be pricey but if you’ve got a stash of Bitcoin you want to use, it is worth it.

A brain wallet: Have you ever seen video of people memorizing a shuffled deck of cards? That’s a brain wallet, but instead of memorizing cards, you memorize your address and private key. Using a brain wallet you can literally keep bitcoins in your head.

Other cold storage techniques include fragmented private keys (where your key is broken into pieces and can be reassembled by putting some of the pieces back together) and multisignature addresses (requiring multiple private keys to sign a transaction). 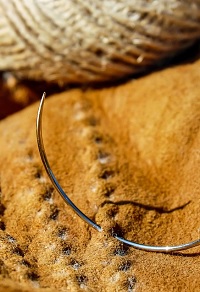 When I first bought my bitcoin, I used Coinbase, which has a hosted wallet. But I wanted to have the experience of owning my own Bitcoin. I also learned that the Bitcoin Blockchain was going to split into two forks. Getting my Bitcoin on the blockchain before the split would mean I had coin on both forks. I’ll write in the future about why this is significant.

Getting my coin into my address on the blockchain requires getting out of a hosted wallet and into a hot or cold wallet.

The first step in doing this is to make a wallet. It’s just like leatherwork class at scout camp when I made that crappy wallet that fell apart a week later, except this time I did a better job because I had better tools. Instead of dull scissors and needles, I used an iPhone.

The tool for making a wallet are a Bitcoin address and private key generator, which is basically just a way to create randomness. You can find these by Googling “Bitcoin Paper Wallet.”

Because I’m paranoid about losing my Bitcoin through human error, I want an easier-to-use hot wallet. After reading the reviews, I’ve decided to use a software wallet called Copay for my phone. My choice based solely on reviews that stressed the ease of backing up a Copay wallet.

Making a Bitcoin wallet is easier than sewing together pieces of leather, but the results are far less satisfying. My first Bitcoin wallet will not call to mind any special times or smells. It won’t look good on the shelf, be loved by my children, or go under my pillow. The tooth fairy is not amused.

In my next post, I’ll use my new wallet to move Bitcoin from Coinbase.